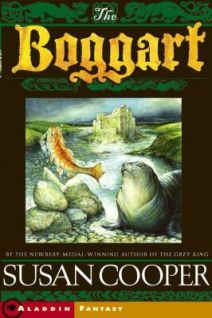 When the Volnik family of Toronto inherits an ancient castle in Scotland, they also inherit the Boggart, a mischievous spirit that has lived there for centuries. When the Volniks unwittingly bring the Boggart back to Canada, the results are explosive.

In a tumbledown castle in the Western Highlands of Scotland lives the Boggart. He is invisible — an ancient mischievous spirit, solitary and sly, born of a magic as old as the rocks and the waves. He has lived in Castle Keep for centuries, playing tricks on the owners. But the last Scottish owner has died and left the castle to his great-nephew Robert Volnik of Toronto, Canada. The Volnik family — including Emily and her nine-year-old computer genius brother Jessup — visit Castle Keep, and when they return to Toronto, they unwittingly take the Boggart with them.
The astonishments, delight, and horrors that invade their lives with the arrival of the Boggart fill this swiftly moving story. The collision of modern techology and the Old Magic brings perils nobody could have imagined — and, in the end, an amazing and touching solution to the problem of the Boggart who has found himself on the wrong side of the ocean.
Sometimes extremely funny, sometimes wildly scary, and always totally absorbing, this remarkable story — brilliantly imagined and beautifully written — marks the return of the Newbery Award winner Susan Cooper to the field of novels for young readers. An outstanding achievement, “The Boggart” will work its special magic on all who read it.
(Summary from Flipkart.com)


Because this book is absolutely hilarious, let me provide you with a few quotes. 🙂
“He (the Boggart) reviewed his plans for the morning. He would start by throwing pans around in the kitchen, if nobody was there. Then he would squawl like a lovesick cat, drawing the attention of even Fergus’s (the dog) deaf ears, perhaps – and certainly of the MacDevon (the original owner of the castle) who could never abide cats.
When that brought the MacDevon out of his bed or his chair, the Boggart would take on the shape of a little black kitten… The Boggart hugged himself gleefully…”


“…it was all he could do not to snatch one of the dishes our of Jessup’s hand. Instead… he flittered down and stole the fudge sauce jar… What was this? The smooth chocolate sweetness was like an explosion of delight in his mouth… He was in love. He had forgotten all about Castle Keep. The astounding, luscious taste of fudge sauce made him feel that this odd new world in which he found himself just might be heaven.

“I don’t believe this.” Emily said, “Where’s the jar of fudge sauce?””

Frankly, I could probably go through and quote the whole book! This was light-hearted, hilarious, and entertaining – you might want to check it out!

My Easter Monday plans in a nutshell. 🌱🫖😺
A few stills from life over the past few weeks.
The laziest, happiest fluffy coworker, @opal_la_chatte.
A good day for a winter hike 🌳
First week of the farm box. Allllll the winter greens. 😍
Cozy evening vibes ✨🫖📚 Candle from @frostbeardmpls.