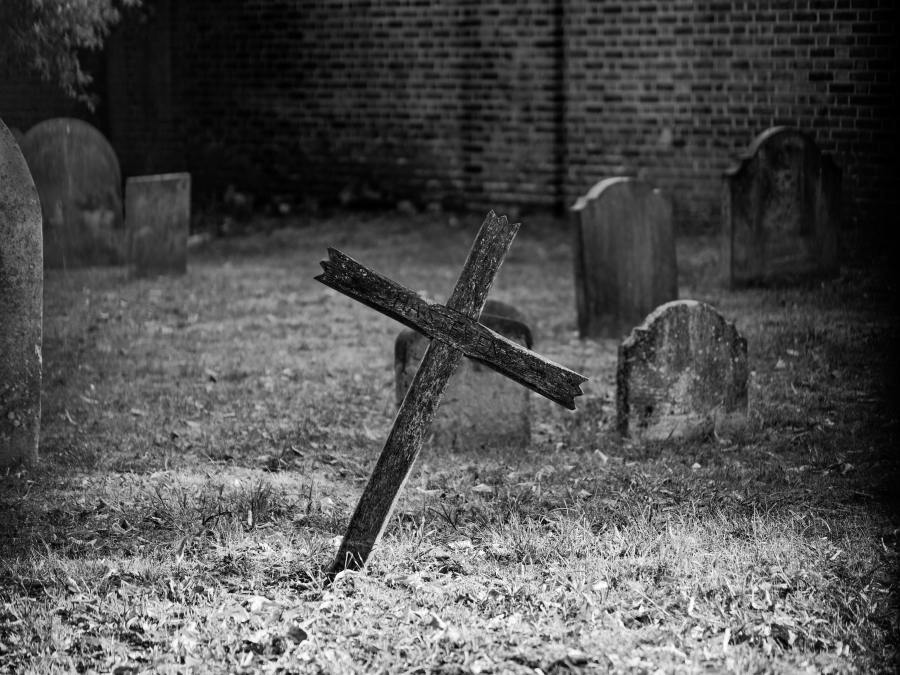 We began this Holy Week thinking about crowds. The crowds that followed Jesus, shouting Hosanna in the Highest, and waving palm branches. A crowd, that, as Fr. Noah pointed out, so quickly changed from “Hosanna” to “Crucify him”—a crowd caught up in the energy of celebration which quickly turns to discontent. A crowd that follows Jesus, until it… doesn’t. As the shouts of “crucify him” fade away, we find Jesus carrying the cross, alone on the way to Golgatha.

There are the soldiers, and later on, a few disciples—mostly women. There are the passersby on the road who read Pilate’s inscription. But there are no crowds… celebratory or mocking or otherwise.

And as most of the soldiers leave, a quiet descends over Golgatha.

A quiet so loud that it rings in your ears, as they adjust after the noise of the week. A quiet punctuated only by the shuffle of the guards, or the cart-wheels of a wagon passing by.

Punctuated only by an occasional sob from the disciples, whose grief is mostly expressed in wordless, soundless horror.

Punctuated by increasing sounds of labored breathing, as the crucified struggle for air, in a slow death by suffocation.

It is quiet now, as the crowds have fallen away, refusing to go this far. The energy that came from getting caught up in the crowd has deflated.

The shouts, and echoes, of “crucify him”, have fallen away, as those people go on about their normal lives, or go home and try not to think too hard about the implications of the words that they’ve just said. Jesus of Nazareth is just another man, another revolutionary, another lost hope in a sea of hopelessness.

And it is at this bottleneck of the cross that we, sitting, watching, and waiting in this quiet, discover just where it is that Jesus will come to us.

At the point of pain and death—the end of all things—that is where the crowd will not go. We humans will do a great deal to avoid death. We refuse to speak of it, or refer to it with kind euphemisms like “passing away” or even sometimes love and fear it so much that we pretend to are lords and masters over it—able to mete it out as if we can judge when someone deserves to… die.

But whether we avoid talking about it at all costs or find in it our solution to uncomfortable truths that we would rather not face about ourselves and others, death has outsized power. Seeing the death of Jesus, of whom they shouted “crucify”, is too much. It reminds the crowd of the very real possibility of their own death.

And after all, there’s no point in following Jesus now, since he is at a place of desolation. The end. A place where, after dying a painful, torturous death, the kindest act of remembrance humanity can offer is clean linen cloths and a new tomb. A kind gesture of, I’m sorry it had to end this way.

We, who sit in this tension of knowing this story, and sitting again at the cross, on this Good Friday, know that it was not the end. But for the crowd, the disciples—there is no such hope.

But is into this hopelessness that the true grace of the Incarnate God comes. It is into this hopelessness that Jesus comes. Jesus, exemplar of a human life of love and service, comes to death—the epitome of our desolation and fear. Jesus comes to our end, and dwells among us, redeeming the thing we fear most. Jesus goes to the place where even the zealous crowd fears to tread.

And so Christ meets us in the place we fear may be our end. He meets us, afraid, lingering in the silence of Golgatha, or behind locked doors, or in the thoughts we are unable to name out loud. He meets us at the cross, and at the cross, deals with us, as Thomas Aquinas says, not as we are, but as we are becoming. Jesus draws us out of hopelessness by entering that place of fear, and redeeming it, and us.

Jesus, crucified, saves us by vanquishing hopelessness itself, showing us that this end of all things is instead a re-beginning. That one day, we too shall be at this thing that humans call an end, and instead, as we hear in our funeral liturgy, “even at the grave… make our song”.

Jesus in the quiet, in the absence of crowds, became incarnate even unto death on a cross.

Peach pie! Celebrating that the curate didn’t burn the church down during the rector’s two week vacation. 🥧🥧🥧
This is the crazed look he gets in his eye before he pounces on something (me). #SherlockTheSiamese
Still life
Saturdays are for books 📚📚📚 (I only bought two, okay? Please be proud of my restraint.)
Summer days—garden flowers, the best summer veg, good reads, finished projects.
The newest dahlia color, homemade chapati and yalekosu palya, and looking forward to a few days in this hammock soon. Happy weekend to me.